Across the Herzegovinian Karst 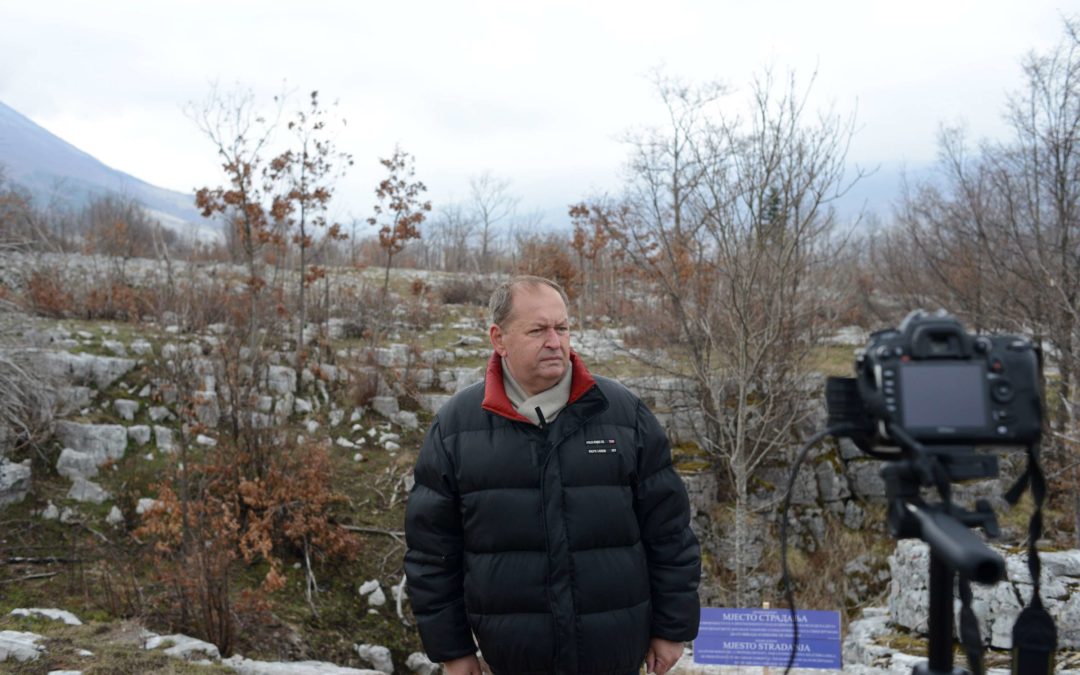 On the Other Side of Mount Velež

We started the action by marking the former police resort at Boračko Lake near Konjic. In 1992, the former police resort and the basement of the Strela Cafe Bar were used by the Army of Republika Srpska and some paramilitary formations as a site of detention for Bosniaks and Croats who were brought there from across eastern Herzegovina. The male and female prisoners were subjected to inhumane conditions, abuse and beatings, and many of them were later found in the karst pits on the slopes of Mount Prenj and Mount Velež. The female prisoners were subjected to particularly cruel treatment, including sexual abuse and slavery.

Velež is a mountain range stretching from east to west, from Mostar to Nevesinje, during the past war, it was partly a line separating the warring sides. Its name derives from that of the Slavic god Veles, the god of the underworld and of chaos who was known to abduct people and livestock from the surface of the earth and drag them to his world underground. The wartime chaos surrounding Mount Velež in 1992 was, in a sense, the embodiment of the attributes ascribed to the Slavic god that the Mountain was named after – some of the worst crimes in the past war, as well as during the Second World War, included throwing people into the underworld, the karst pits. 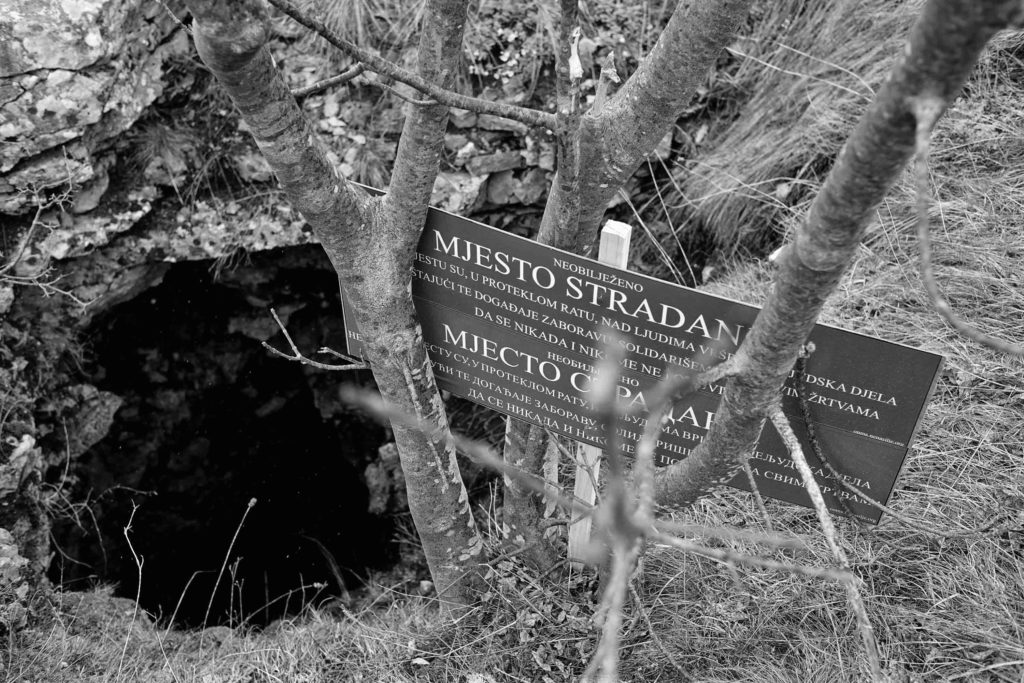 At the north-eastern foothills of Velež and with a population of only 244 lies the Municipality of Istočni Mostar, created by the Dayton Agreement and covering the area of the City of Mostar that was under the control of the Army of Republika Srpska during the past war. In the wartime chaos of 1992, Bosniaks and Croats from the Nevesinje area who were trying to escape to areas under the control of ARBiH and HVO were forced to make their way over the territory of this local community. Those not lucky enough to make it to safe territory were captured by VRS units and detained in the centre of what is today the Munincipality of Istočni Mostar, in the schoolhouse in Dnopolje. At different times during the war, the schoolhouse served as a site of detention for persons captured while trying to make it across the territory. One such group, made up of people from the villages of Kljuna, Hrušte and Luka near Nevesinje, was tortured at the schoolhouse and then taken to the Doline-Kušići pit where they were executed.

We marked the Doline-Kušići pit with the assistance and support of Senad Sudo Omerika from Mostar who joined us in the action to mark locations in this area.

Senad Omerika has spent years researching and raising awareness about the crimes in the wider Nevesinje area from the past war. He has authored a number of articles, exhibitions and films on the suffering of Bosniaks and Croats from Nevesinje.

Senad also told us about other pits and sites of suffering in this area and joined us in marking another unmarked site of suffering. Together, we marked the Dubravica-Breza pit on the opposite side of the valley at the foothills of Velež. At this site, members of Serb military formations executed a group of 27 Bosniak men captured while attempting to make it across to safe territory. The remains of people executed at this site were later found on the slopes of Mount Velež in a secondary mass grave at Teleća lastva, where they had been transferred after the signing of the Dayton Agreement by those wanting to hide traces of the crime. The men executed at this site were part of a group of over 80 people, which included women and children and the elderly, and all of whom were captured in an attempt to cross over to safe territory and imprisoned in the schoolhouse in Dnopolje. At the schoolhouse, men were separated and taken to the Dubravica-Breza pit, while the women, children and the elderly were taken to the Alatnica facility in Nevesinje, which we also marked as part of this action.

Before 1991, the Nevesinje area was home to more than 3500 “non-Serbs”, as the ICTY, in an effort to simplify terminology, started referring to victims in areas under the control of the Army of Republika Srpska and other Serb military formations. By the end of spring in 1992, non-Serbs had become undesirables in the wider area of Nevesinje and eastern Herzegovina and were expelled and forcibly detained in various facilities and sites, as was the common practice throughout war-torn former Yugoslavia. A good part of the non-Serb population of Nevesinje and the surrounding villages made it across Mount Velež and reached safe territory around Mostar, but those that were not so lucky ended up imprisoned at sites established in the Nevesinje area.

The Alatnica facility, now owned by the food industry giant Swisslion, was used in 1992 as a site of detention for non-Serb women, children and the elderly from the Nevesinje area. Paramilitary units working closely with the police in Herzegovina and Nevesinje had control over the detention facility in Alatnica. Krsto Savić, as the chief of the Trebinje Public Security Centre and hierarchically superior to all public security stations in eastern Herzegovina, was convicted by the Court of BiH for crimes committed at this detention facility and in other detention facilities in the Nevesinje area where non-Serb men and women had been imprisoned.

Military-aged men from the Nevesinje area were separated and taken to other detention facilities, including the former JNA Hall, today the Music School in the centre of Nevesinje, which we also marked. The men and women imprisoned at these sites were subjected to abuse and inhumane conditions, and most of them were subsequently forcibly transferred to detention facilities in Bileća, most to the Moša Pijade JNA barracks.

Among the Rifles’ Bayonets

The final destination for almost all of the male and female prisoners and a type of concentration detention facility for the area of eastern Herzegovina was the Moša Pijade barracks in Bileća. The barracks was named after a communist revolutionary who was imprisoned there in 1940, together with other prominent revolutionaries and volunteers returning from Spain, in a camp the pre-war Kingdom of Yugoslavia established in Bileća to imprison communists. In the repressive years before the Second World War, one of the prisoners, a Slovenian communist called Milan Apih, wrote the song “Bilećanka” that became one of the most popular and most performed songs in the post-war period, describing the days of imprisonment in the Bileća camp.

Through exile and suffering,

through the prison darkness,

a new life comes to us,

The verses of this song are etched into collective memory and will continue to refer back to the suffering of the people imprisoned in Bileća at the time. More recent suffering, especially from the last war, has not yet been appropriately dignified in song, or by a memorial to tell future generations of what happened in the Bileća area and warn them about what it means to lose freedom and dignity. One of the ways to foster remembrance of those events is our initiative to mark unmarked sites of suffering. This time, we marked detention sites in Bileća, including the barracks that used to be named after one of the people formerly imprisoned in Bileća. 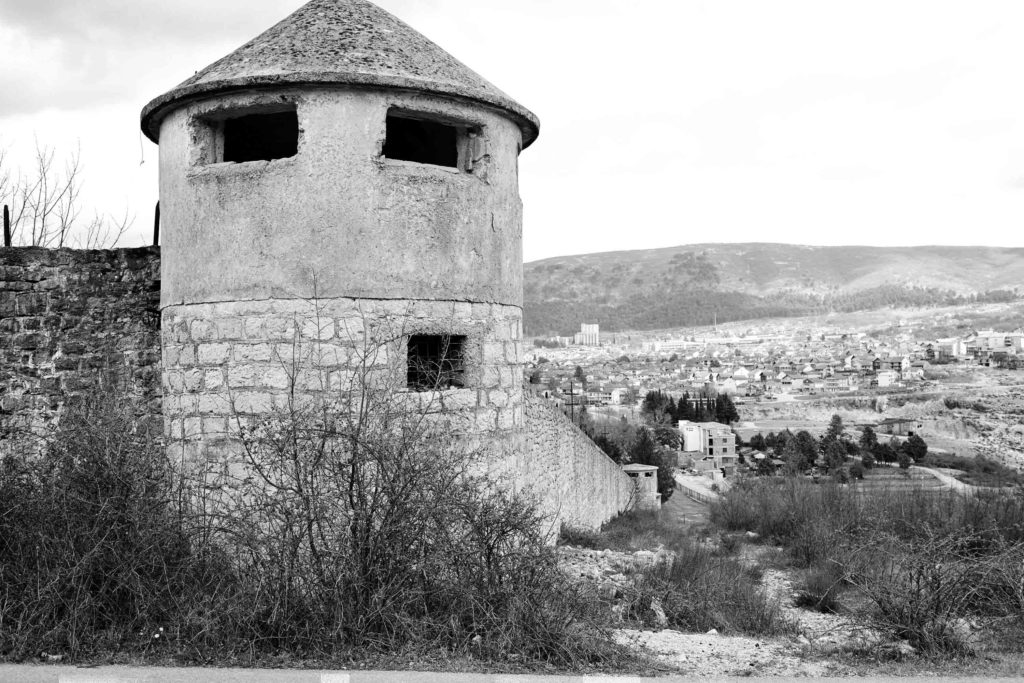 The Moša Pijade barracks is currently in active use by the Armed Forces of BiH and has been renamed Bilećki borci [Bileća Fighters]. Access to the building is difficult because it is under constant guard and there is a complicated procedure to gain admission. Because of its importance as a detention site, however, we decided to mark it in a slightly different way. During 1991, the barracks served as a detention site for prisoners of war captured during combat operations in southern Croatia, but during 1992, it was mostly non-Serb civilians from Bileća, Nevesinje, Gacko, Trebinje, etc. that were imprisoned at the barracks. Both groups of prisoners, though protected under international law and conventions, were subjected to inhumane conditions, abuse, torture and interrogations. The prison was run by units of the Republika Srpska Army whose members were later tried and convicted of crimes committed there.

Apart from the barracks, we also marked the former Student Dorm in Bileća that houses inspection and forestry institutions today. In 1992, the building was used as a site of detention for Bosniaks and Croats, mostly civilians from the Bileća area. The prisoners were subjected to psychological and physical abuse and were later forcibly transferred to the Bileća barracks. Reserve police units ran the prison at the Student Dorm.

This action to mark unmarked sites of suffering brings us to a total of 119 marked sites of suffering. Marking locations in eastern Herzegovina has been a challenge for us for a while because we were unable to find someone from the area who could provide assistance and support during our action. Having marked eight locations, which we reached with a certain degree of apprehension, we can say we’re quite satisfied with what we managed to document and mark, even though some locations still remained inaccessible, but we plan to come back to them in the future. Our activities continue with a public campaign on social networks and other media platforms. We are leaving traces in the digital world about what happened in this region in the past war.

Although a physical memorial is still impossible at these sites, our initiative at least leaves a form of remembrance in the digital sphere, as a way to inform younger generations about what happened in this region during the 1990s. Our on-site intervention that is posted digitally online is a way to get people living in the region to think about what happened (to them) and what would be the fairest way to address the crimes that took place there. A fair attitude towards negative moments from our common wartime past, which includes marking sites of suffering of others and remembering things from our past that should never be repeated, these create a moral pledge to warn people that no one must ever commit the kinds of crimes that were committed at these sites.